skip to main | skip to sidebar

In From Morn to Midnight (original title: Von morgens bis mitternachts, directed by Karlheinz Martin, b/w, silent, Germany, 1920) a bank employee (Ernst Deutsch) is so affected by the plight of an elegant lady from Italy (Erna Morena), whom the bank has refused the money she needs to buy a painting, that he helps himself out of the till and sets off for the lady's hotel, determined to help her. But when she declines his offer of money and refuses to run away with him, he becomes a fugitive from justice, seeking refuge in the crowded bars, dance halls, theatres and hostels of the city at night.

The film is based on Georg Kaiser's drama of the same name, first staged in 1917. Under Karlheinz Martin's direction we follow the course of the hero's moral breakdown. Convinced that his family has neither understanding nor feeling for him, he turns his back on them. But the pleasures of the metropolis at night prove to be short-lived. Finally he accepts the invitation of a young Salvation Army officer (Roma Bahn) to seek help at an Army refuge...

The actors, whose faces are illuminated by intense white spot lights, play in front of symbolically decorated flats set against dark backgrounds. They present a world devoid of enlightenment and dominated by urge, fear and money.

The film will be introduced as a classical example of Expressionist outlook and method by Geoffrey Sweet. Geoffrey will accompany the film on the piano with a score of his own which includes compositions of the time by Alban Berg and Hanns Eisler.

The film lasts seventy two minutes, and the whole presentation is expected to take about two hours.

Geoffrey Sweet is a free-lance pianist and lecturer. He studied at the Royal Scottish Academy of Music and Drama and was a Junior Research Fellow at Pembroke College, Oxford, where he was awarded a doctorate in early twentieth-century German literature.
Posted by Geoffrey at 23:50 No comments:

From Morn to the Midnight Hour 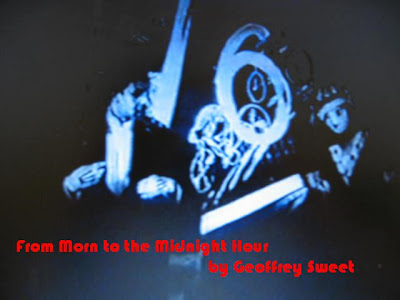 Posted by Geoffrey at 12:15 No comments:

A Poster with Buster Keaton on it 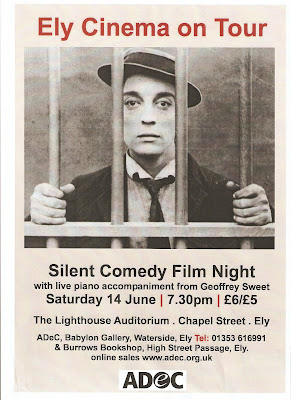 Posted by Geoffrey at 10:32 No comments:

Geoffrey
I have composed, and am performing, piano music for the following silent movies: Charlie Chaplin's "Police", Buster Keaton's "The Blacksmith" and "The Boat", Laurel and Hardy's "The Lucky Dog", and Karlheinz Martin's "Von morgens bis mitternachts".